This roof terrace garden design feels like a private oasis. The client, a busy investor with a hectic schedule, sought escape from the rat race without actually having to leave it. Our focus was therefore on turning the gaze inward into the space.

Though near-panoramic, the view from this terrace was dominated by neighbouring blocks. The most immediate of these, overlooking the space, made it feel more oppressive than it should. Clearly, we had to start with a boundary wall. However, it was also important that we didn’t make the problem even worse by obstructing the gaze in a way that felt too artificial.

Hence our choice of cedar batten fencing for a natural, almost rattan effect. Attached by wooden posts to the existing concrete parapet, this 1.2-metre-high barrier makes the space feel cosy and private. It also helps to shelter this South East London roof terrace from the wind.

Another structural feature designed in part to soften that boundary wall is the raised bed planting. These substantial beds, measuring one metre front to back, span the outside bounds of the space. Filled with soft, textural planting, natural bark chipping, and pebbles, they serve to cushion the eye’s terminus at the fence — which could otherwise feel rather abrupt.

As is often the case in minimalist urban garden designs, simplicity on the surface hides careful planning beneath. To protect the concrete parapet onto which the raised beds back, for instance, we lined it with a damp-proof membrane. We also dotted the raised beds with 30-watt LED spot lights, disguised during the day in among the foliage by way of their black plastic casing.

The same goes for that focal point seating, this small urban gardens’s most salient feature. Despite their minimalism, both floating benches (curved and straight) had to be fabricated off-site and craned into place — each measuring roughly two metres across. But they were well worth the effort. Made from iroko, an African hardwood with a gorgeous teak-like appearance and, crucially, zero-maintenance outdoor durability, they were perfect for this client’s brief.

We placed the curved floating bench in the outside corner, further softening the square of this garden. It’s impossible to miss. The colour of the circular paved base mirrors that of the fencing while flashing with the astroturf’s green. And at night it lights up, surrounded by LEDs: 1-watt bulbs around the innermost edge and wraparound lights to the rear.

Finally, we included a natural stone water feature as a secondary focus and to help mask the sounds of the city.

Planting a roof terrace garden can be tricky. As well as considering the hardiness of plants, we have to be mindful of drainage. That’s why it’s common to use artificial grass in roof garden design, as we have done here.

Space is another limitation. Although it was vital to have lots of plants to isolate this terrace from the city, it was just as important (for much the same reason) to make sure we didn’t crowd the space.

Silver birch is naturally sparse, and also gives us some height. Their canopies here help to hide the blocks of flats without shutting out too much sky. And when it’s dark, LED uplights provide an equivalent effect: drawing the gaze inward from the lights of the flats to more of a natural focus.

The foliage at their base is densely packed but feathery, thronging with life and colour. Filling the raised beds from one end to the other, they occupy the whole field of vision. But they’re surprisingly low-maintenance, as per the client’s request.

Before and After Roof terrace garden Design

As you can tell from the pictures below, this roof terrace garden felt more claustrophobic without the boundary fence. This seeming paradox just goes to show how we use focal points in small gardens to create the illusion of space.

The client wanted a place to escape and unwind from the stresses of work. Now with plenty of seating and natural visual interest, this terrace is completely transformed. Yet it’s not jarringly organic for a small urban garden, or at odds with his apartment’s design. Typical of Jonathan Taylor gardens, it’s a fusion of rustic and contemporary — at once both minimalist and lush and inviting. 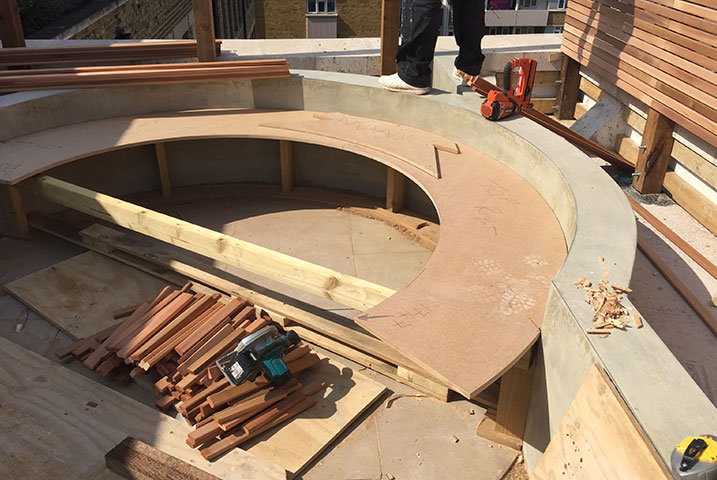 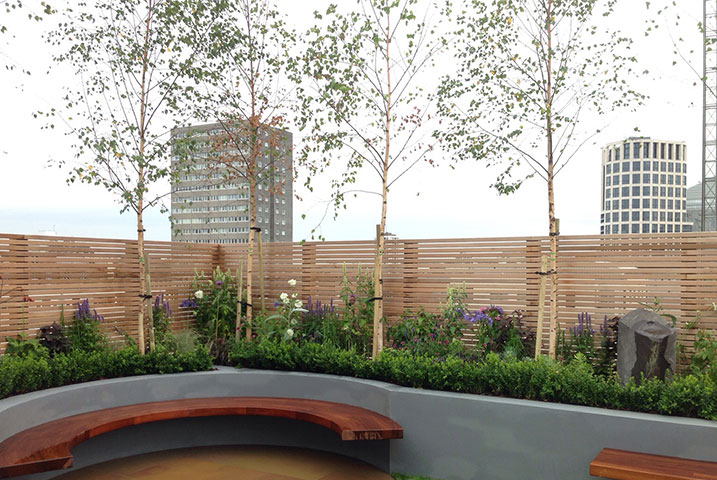 Before researching rooftop garden designers, I was rearranging pot plants and furniture in the vain hope that I might somehow start to like a terrace I fundamentally didn’t. After I chose from a few different modern roof terrace designs Jonathan came up with, his team just got on with it. My terrace is now completely unique and precisely customised to me. I love it.

Looking for more information about small roof terrace design in London or just have a general enquiry?