The client, an avid gardener, wanted well-defined structure and plenty of shrubs for this modern Georgian garden in Greater London. He admired the style of English courtyard gardens but, having spent time exploring Japan, wanted Eastern elements included as well.

Rather than fusing these two different styles and diluting them across the whole garden, we separated them out into zones. This meets the client’s request for structure while emphasising the merits of each.

Contemporary narrow garden design ideas often include curving pathways and asymmetrical foci to visually widen the space. You can see aspects of that here with the sweeping arc of that large stone patio, as well as the shed to the left. But it’s not a central focus of the garden. In fact, we deliberately kept it separate with a modest overhang and a square-edged border filled with Scottish pebbles and soil.

Mostly we’ve taken a different approach — accentuating the layout with a “Medallion” lawn that conforms to its rectangle shape, as well as a walkway that frames it. To make it feel more open, though, we’ve employed a number of tricks:

The lush mixed borders along the length of the walkway obscure the boundary fence, and the hedges give them some stepping. This naturalist approach to the design of hard landscaping in Georgian gardens is quintessential to the style and period.

Also, at the mid-point of each border is a recessed niche where the granite path cuts into the hedge. For a subtle and tidy asymmetry, the one on the left (looking out from the house) is smaller than the one on the right: 1.2 metres wide versus 1.8 metres wide. Its elegant water feature serves as a focus, while the other niche has ornamental chairs. Both are backed by a yew hedge.

As well as helping to “widen” the layout, these niches help to “lengthen” it too. Extending the journey (of the gaze and the feet) from one end of the garden to the other, they provide a place to pause and take emphasis away from the rear.

This latter point was important because of the rear garden’s contrasting style. Although a minimal design compared to a lot of modern courtyard architecture, it’s full of Japanese garden ideas that could outshine the Georgian lawn.

There is, for example, another focal point water feature — larger and bolder than the first. There are also the eye-catching Acers and other Asian plants (more on these below). In any case, we wanted a smooth transition between the two gardens, each of which should feel self-enclosed. Drawing attention to the rear garden from the lawn would undermine this effect.

The box hedge divider is centrally parted to make way for a branch of the path, which quickly gives way to Indian sandstone stepping stones and a Zen-like ground of Scottish pebbles. Arranged in a cross, the stepping stones have a navigational feel. They give us directions to walk in and quarters to explore, making the end of the garden feel larger than it actually is. Straight ahead is the water feature, while to the left and right are paved areas. The left of these is the larger by far, providing seating in accord with the brief.

Georgian gardens historically showcased strange exotic plants from abroad. This modern Georgian garden in Greater London is no exception. Actually, this tradition lets us fuse the two gardens without having to compromise either style.

Among our classic English border shrubs (rosemary, lilac, and structural box hedge) we planted heavenly bamboos, Chinese hibiscus, and vibrant Japanese maples. There’s also the multicolour ‘Goshiki’ with its pink and white to gold and bronze leaves, ‘Nuccio’s Pearl’ with its fascinating double flowers, and Forsythia intermedia for a shock of vibrant, almost painted-on yellow. The colours and textures of all these Asian natives add interest to the understated style.

Typical of tranquil urban gardens, the rear garden has a much cooler colour scheme. But the blue of the Agapanthus africanus, for instance, still dazzles with its trumpet-shaped flowers. Likewise the ‘Branford Rambler’ (a cross between Lady and Japanese painted fern) has an exotic texture and vibrant green leaves. The Acers here are of a cooler palette too, including the light gold ‘Shirasawa’ and the peculiarly green ‘Seiryu’.

Before and After a fusion garden design

What was once a neglected, characterless backyard is now a well-structured garden with not one but three distinctive personalities. There’s the modern patio landscape design with its sweeping convex arc; the Georgian English courtyard garden; and the Japanese garden beyond. All that remains of its former state is the shade of the trees to the rear.

We’ve maximised our use of the limited space and made this narrow garden feel not just longer but substantially wider as well. As requested, there’s varied gardening for the client to keep his green fingers busy, as well as easy access to the borders. 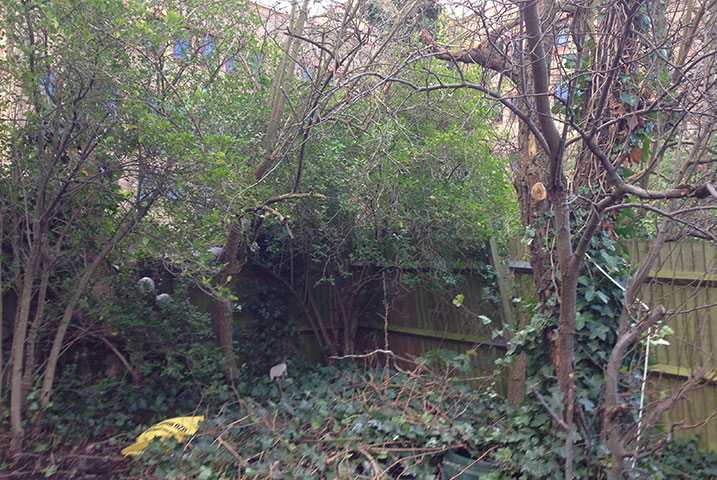 I’m absolutely thrilled and amazed by what Jonathan has done with my “builder’s yard”. I’ve travelled throughout East Asia, Japan especially, and collected my own ideas for minimalist garden designs… the trouble was bringing them together in a way that felt authentic for me. Jonathan & co have done that in spades and completely surpassed expectation.

Looking for more information about contemporary Georgian garden design in Greater London or just have a general enquiry?

Send us a message below and we’ll get back to you as soon as we can.